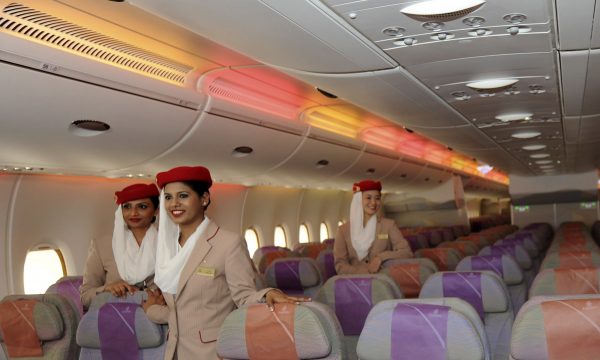 Titolo: Air stewardesses stand in the cabin of a

Descrizione: Air stewardesses stand in the cabin of an Emirates A380 Airbus- the world's largest passenger aircraft - after touchdown at terminal T-3 of Indira Gandhi International Airport in New Delhi on July 15, 2010. The Emirates flight EK 516 was the first commercial A380 flight to land at the new terminal a day after it was inaugurated -- a shiny glass-and-steel symbol of the country's aspirations as an emerging global power. The state-of-the-art hub, which cost nearly three billion dollars and can handle 34 million passengers a year, was showcased at a special ceremony by Prime Minister Manmohan Singh ahead of its mid-July public opening. The airport which can handle 34 million passengers a year was built in a record 37 months when similar projects abroad have taken more than 60 months, officials said. AFP PHOTO/RAVEENDRAN (Photo credit should read RAVEENDRAN/AFP/Getty Images) 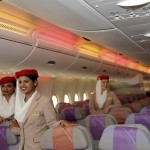